There is a trend in apologetics today towards what I might call a “minimalistic” approach to defending the faith. Basically this is where someone tries to prove the least amount possible about Christianity in order to get the non-Christian to take one step in our direction.  And this is typically done with an evidentialist methodology using the so-called consensus of modern scholars as the main authority.

There are a number of challenges to this sort of approach which I cannot take up here.  But, what is needed is an apologetic approach that is more full-orbed, holistic, and worldview-oriented.  Such an approach doesn’t simply try to placate the non-Christian by meeting his requirements, but it challenges the non-Christian’s worldview from the inside out.

Such an approach is embodied in James Anderson’s new book, Why Should I Believe Christianity? (Christian Focus, 2016).  Anderson, Associate Professor of Theology and Philosophy at RTS Charlotte, has written one of the most compelling cases for the truth of Christianity that I’ve ever read.

There are several features about Anderson’s new volume that are worth noting: 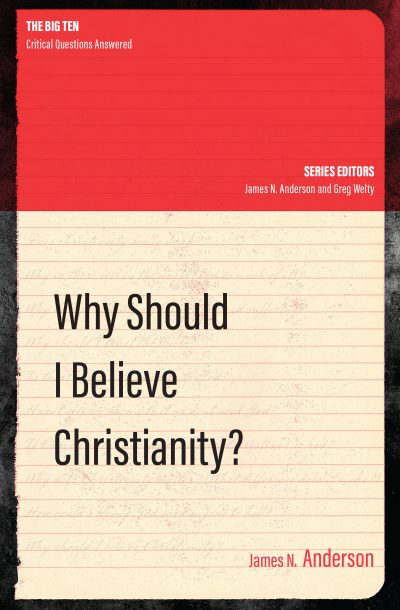 Here is the description of the book:

Some people boldly claim, “Christianity is fine for some, but it isn’t for me”. Others feel it is just outdated and irrelevant. For better or worse, everyone in the Western world has come into contact with Christianity: we all have some opinion on it.  James Anderson, with a clear, humorous logic, explores what Christianity really claims, and shows the underlying reason and consistency behind these claims. By the end of Why Should I Believe Christianity?, while you may not agree with the Christian worldview, it is impossible to be left sitting on the fence.

Here are some of the endorsements:

… The Christian ministry, taken as a whole, must be understood as an apologetic calling. This is why books like Why Should I Believe Christianity deserve careful reading by pastors and laypeople alike. In this book, believers will find a compelling defense of the Christian worldview and the resources necessary to stand firm in a faithless age. (R. Albert Mohler ~ President, The Southern Baptist Theological Seminary, Louisville, Kentucky)

… writes with the mind of a scholar but the clarity and tone of a letter to a dear friend. His brief and engaging book covers a wide array of topics, from discussions on worldviews and evidence to philosophical arguments to inferences from the biblical record-all in the simplest terms possible. (Brian Morley ~ Professor of Philosophy and Apologetics, The Masters College, Santa Clarita, California)

James Anderson does a masterful job … This book will be a necessary tool for anyone interested in addressing arguments against Christian truth.
(K. Scott Oliphint ~ Professor of Apologetics and Systematic Theology, Westminster Theological Seminary, Philadelphia, Pennsylvania)

James Anderson is one of the best writers in contemporary Reformed theology and apologetics … This is one of the finest resources available for presenting the rationale of the Christian faith to an unbelieving reader. (John M. Frame ~ Professor of Systematic Theology and Philosophy, Reformed Theological Seminary, Orlando, Florida)