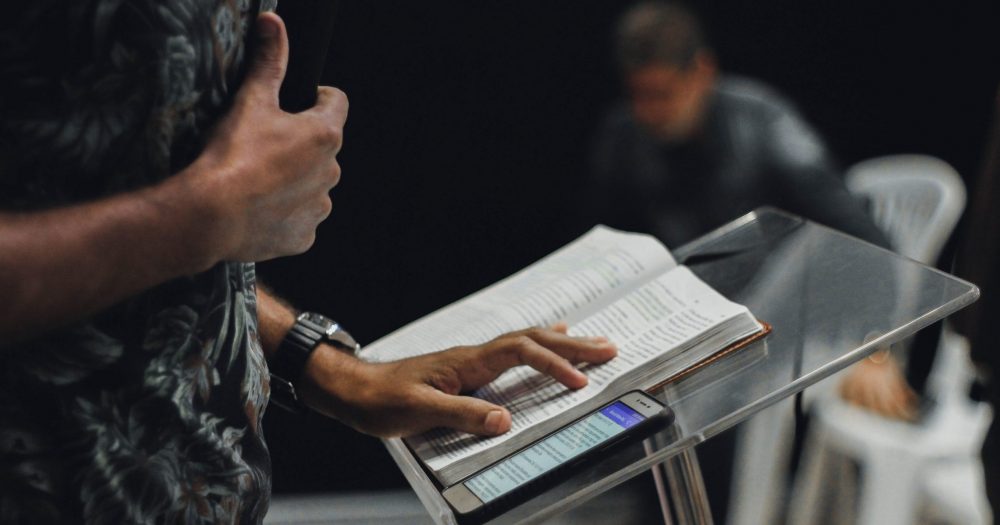 It’s one of the most common questions I get when I talk with Christians who are struggling with what they believe. They’ve stumbled across some problem in the Bible or some issue raised by critical scholars and they don’t have an answer. Then they ask:

Why didn’t my pastor tell me about that?

Lurking behind this question is the concern that perhaps they haven’t been given the whole story. Perhaps their pastor (and the Christian church in general) has been holding things back so as not to upset their faith. Maybe all they’ve ever heard is one version—a sanitized, idealistic version—of what’s in the Bible.

And, this concern is often partly true. Of course, this doesn’t mean that most churches are intentionally hiding the difficult parts of the Bible. That may happen on rare occasion, but I don’t think that characterizes the average evangelical church.

But it does mean that many churches offer a rather light diet of Christian theology, teaching, and biblical instruction. And therefore the average church member—even after maybe twenty years—has only received a smattering of Christian teaching, most of which does not seriously probe the challenging aspects of the Christian faith.

This problem is particularly acute when it comes to Christian college students heading off to a secular university. Even though they may have grown up in a solid church, they often find themselves bombarded with ideas and concepts that they’ve never heard before. Stunned by the whole experience, they may stumble back to their home church and ask, “Why didn’t my pastor tell me about that?”

Of course, it is for this very reason that I wrote my recent book, Surviving Religion 101: Letters to a Christian Student on Keeping the Faith in College (Crossway, 2021). The goal of that book is to help college students think through these complex issues that perhaps they never heard about in their churches.

But there are other ways that we can help inoculate Christians against the “Why didn’t my pastor tell me about that?” phenomenon. One way is the intriguing new volume by Kristin Swenson: A Most Peculiar Book: The Inherent Strangeness of the Bible (Oxford, 2021).

Her thesis is that the Bible is weird—much weirder than we tend to realize—and that such peculiarity needs to be faced rather that dismissed or ducked. The oddity of the Bible is part of its charm, and if we don’t reckon with it then we are not taking the Bible seriously. She writes:

Besides texts of lofty wisdom, inspiration, comfort and guidance, the Bible contains bewildering archaisms, inconsistencies, questionable ethics, and herky-jerky narrative style. Yet, those features barely get a passing glance these days. Some believers simply explain them away, while nonbelievers use them as a reason to dismiss the Bible entirely. This book looks squarely at what’s so weird . . . and in the process shows how those qualities can actually enrich one’s relationship, religious or not, to the text. (xiv)

Not surprisingly, Swenson goes well beyond just acknowledging that the Bible is often peculiar. She also argues it is deeply problematic, offensive, contradictory, and appears to approve of morally troubling behavior (genocide, slavery, misogyny, etc.).  And I push back against such conclusions in my recent review of her book which is posted on The Gospel Coalition.

Even so, I still think evangelicals have something to learn from Swenson. It’s not enough to simply quote a selected Bible verses here and there, as it suits our needs. We must come to grips with the entirety of the Bible, even the difficult portions. And reading Swenson’s book will put those difficult portions squarely in our face.

So, here’s an idea. What if churches offered a small group study or a Sunday School class on Swenson’s book? Imagine believers reading the book, coming face-to-face with the myriad of critical complaints about the Bible, and then processing those beliefs within a church context led by a pastor? Wouldn’t that be better than those same believers being left to process these complaints in a university context, having never heard them before and with no one to guide them?

Of course, someone might object that such an exercise just needlessly upsets people with issues they don’t need to know about. Maybe it would be better if we just taught them the basics, without bothering them with the complicated parts.

But I would argue that is precisely the strategy that many churches have been employing up till now. And I am not sure how well it is working. Our churches may be filled with numbers, but are they filled with depth?

So, maybe it’s time to put aside the version of Christianity where every Sunday we present only a pre-packaged, cleaned-up, carefully-curated picture of the faith. Instead, maybe we should take church members back into the kitchen, so to speak, where the sausage is made.

Sure, it may not be as clean and tidy. But you might just find that it produces more chefs and less consumers.