I love soccer.  And this Summer has been a great time to enjoy the “beautiful game.”  With the US Women’s team winning the World Cup (and the men’s team placing second in the CONCACAF Gold Cup) there has been a lot to watch.

But, in the Western world, sports are no longer just sports.  Inevitably, cultural and religious issues get mixed in and soon take center stage.

Enter Megan Rapinoe. The openly gay US captain has been making the rounds on talk shows and news programs. She’s even been hailed as an “American hero.”

But, not just because of her soccer skills.  But because of how she promotes LGBTQ issues and calls for more “tolerance” and “acceptance.”

Of course, the irony of such statements hasn’t been missed.  Especially if one considers the story of a different female soccer player, Jaelene Hinkle. Hinkle is widely regarded as one of the best defenders in the nation.

But, despite her widely-praised talent, she was cut from the US national team. Why?  Because the players were required (just think about that word!) to wear rainbow jerseys to support “gay pride.”  And Hinkle, a committed Christian, wouldn’t do it.

Team officials say she was cut purely for soccer reasons. But with Megan Rapinoe on the team, it is understandable why people are skeptical of that explanation. See full story here. 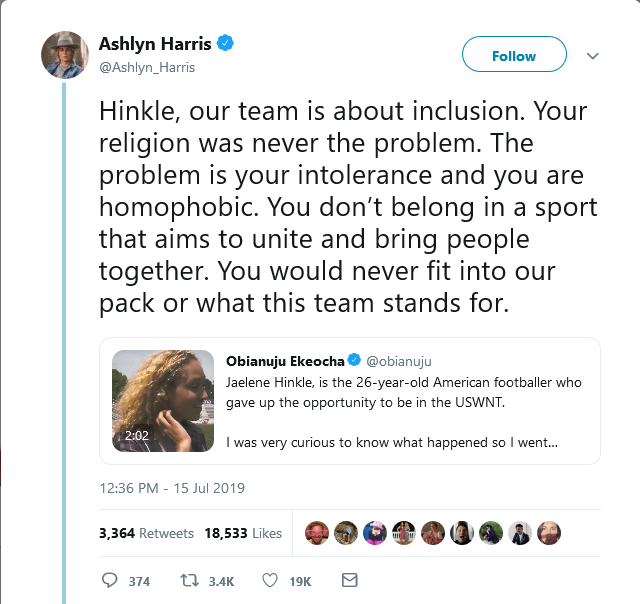 Amazing. It’s stunning to see someone talk about inclusion and then in the next breath say “you don’t belong.”  Apparently, “tolerance” is only given to those people who already agree.  Which, of course, isn’t really tolerance at all.

This whole scenario reminds me of what the earliest Christians faced in the second century.  They had their critics then, too.

One of the most ardent critics was the pagan thinker Celsus.  As James O’Donnell has observed, Celsus “just can’t stand Christians” (Pagans, 101).

So, what did Christians do that caused such irritation in Celsus?  In short, Celsus thought Christians were bad citizens.  Job number one for any Roman citizen was to participate in the public, corporate worship of the Roman gods.

And it was precisely this that Christians refused to do.  After all, they were monotheists.  They worshiped Jesus and him alone.

Why was worshiping the Roman gods so important?  Because it was the gods who gave victory in war, rain for crops, and prosperity to the state.  To neglect the gods was to put the welfare of Rome at risk.

Thus, Christians were viewed as insubordinate to the state.

But, Celsus’ complaint is not just political.  It is also social.  The refusal to worship the gods was seen as anti-social and downright rude.  Instead of joining with their fellow Romans, Christians slinked off to their private, secret meetings where they did who knows what.

Such behavior was suspicious. In the mind of Celsus, it showed that Christians were an “obscure and secret society” (8.49) that threatened the stability of the Empire. Christians “suffer from the disease of sedition” (8.49).

As a result, the insults towards Christians rolled easily off of Celsus’ tongue. Christians were like ants or bats swarming out of their nests; like worms crawling out of a hole; like frogs croaking in a marsh (4.23).  Christians were a menace.

What then should be done with these Christians?  Celsus’ answer is chilling:

If they refuse to render due service to the gods. . . let them not come to manhood, or marry wives, or have children, or indeed take any share in the affairs of life; but let them depart hence with all speed, and leave no posterity behind them, that such a race may become extinct from the face of the earth (8.55)

Translation: get rid of them. Or, at a minimum, don’t let them participate in the normal parts of society.

In many ways, little has changed for two-thousands years.  In our modern cultural climate, Christians are still seen as a threat to the stability of society because they won’t publicly and corporately bow down to the cultural gods.

And make no mistake, the culture always demands that Christians do this publicly.  Everyone has to conform. Or else.

It is ironic, really.  In a culture that so claims to value “tolerance,” Christians who refuse to publicly affirm the cultural gods are given none.

But, the lesson from the early church is clear.  We will not be accepted as citizens of this earthly Kingdom.  But, that is a reason to be even more thankful that Jesus said, “My Kingdom is not of this world” (John 18:36