There is little doubt that most people are confused by the book of Revelation. Perhaps is not surprising, then, that people are equally confused by its journey into the New Testament canon.

Revelation is one of those “debated” books in the early church, along with books like 2 Peter, 2-3 John, and Jude.

If you are looking for more on the canonical history of Revelation, I point you to my recent article entitled, “The Reception of the Book of Revelation in the Early Church” which has just come out in the new volume Book of Seven Seals: The Peculiarity of Revelation, its Manuscripts, Attestation and Transmission, eds. Thomas J. Kraus and Michael Sommer (Mohr Siebeck, 2016), 159-174. 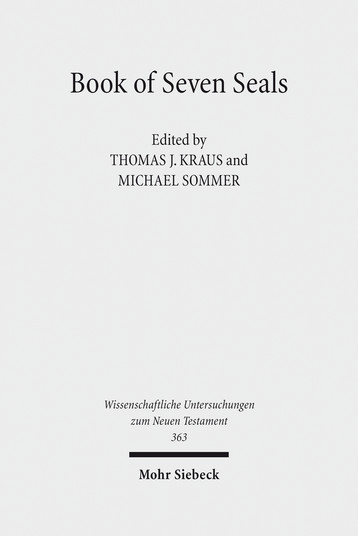 In essence, I argue that Revelation had a very different canonical history than most other debated NT books. Other debated books tended to have a lukewarm reception at the earliest stages, only to gain more and more acceptance over time. Revelation, on the other hand, had nearly the opposite experience; it had a very early and positive reception in many parts of the church, only to run into serious challenges at a later point.

For a briefer (and less academic) overview of Revelation’s canonical history, see my prior blog article “The Book of Revelation: How Difficult Was Its Journey into the Canon.”

You should also check out the many other excellent articles in Book of Seven Seals, which cover a variety of angles on Revelation’s textual and canonical history. Here is a brief description of the book along with an overview of the chapters:

The Book of Revelation is a peculiar text whose special status in early Christianity is manifested by its manuscript attestation, transmission, literary references and discussions among early Church writers. This special status forms the nucleus of these collected essays and is highlighted from various perspectives. Nowadays of course, the Apocalypse has become a treasure trove of famous motifs for artists, composers, poets and novelists. On the other hand, however, it also appears to be something of a bon mot in that its manuscript tradition is rather sparse and highly distinctive. With the help of single phenomena that revolve around the extraordinary attestation and transmission of Revelation, the authors here are able to unveil how its peculiarity was perceived in early Christianity. Its manifestation in manuscripts and in the lively controversy about its value and orthodoxy thus resulted in it being treated as unique.

I. The Peculiarity of Majuscules and Minuscules
Giovanni Bazzana: Write in a Book what you See and Send it to the Seven Assemblies – Jeff Cate: The Curious Case of Psalm 43 – Thomas J. Kraus: ʻWhen symbols and figures become physical objects:ʼ critical notes about some of the “consistently cited witnesses” to the text of Revelation

II. The Peculiarity of Reception
Tobias Nicklas: Christliche Apokalypsen in Ägypten vor Konstantin – Lincoln H. Blumell/Thomas A. Wayment: The ‘Number of the Beast’ – Martin Meiser: Before Canonisation – Michael J. Kruger: The Reception of the Book of Revelation in the Early Church – Jeff Cate: Sisters separated from Birth – Michael Sommer: “Work in progress“ – What do Revelation’s handwriting tell us about its post-canonical role and function inside the Bible

The only drawback to this new volume is the price: $147.  Ouch.  Indeed, the high price might be a fulfillment of the apocalyptic predictions of Revelation itself!

All joking aside, I think this book will make an excellent contribution to the academic discussions of Revelation.  I commend Thomas Kraus and Michael Sommer for their excellent work.