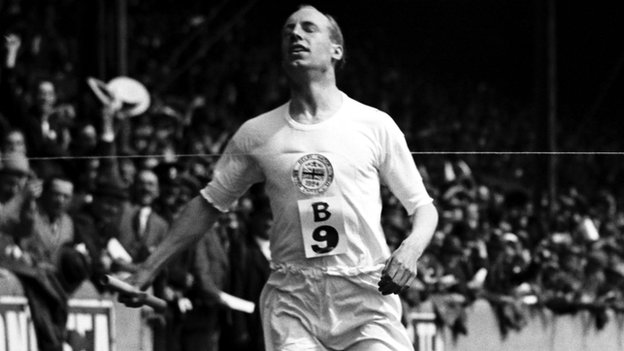 Note:  The complete series on Eric Liddell is now at the bottom of this post.

The Bible makes it clear that one of the greatest helps to running the Christian race is to look at the lives of the many saints that have gone before us.   The author of Hebrews reminds us that “we are surrounded by so great a cloud of witnesses” such as Abraham, Moses, Gideon, Sampson, David, and that therefore we should “run with endurance the race that is set before us” (Heb 12:1).   In other words, the examples of the saints inspire us.  And we should follow those examples.

Now, the word “example” has fallen on rough times in some quarters of the evangelical church.  Some suggest that if we put forth biblical characters as examples that we are in danger of “moralizing” the Bible.  However, the problem with such an idea is that the Bible itself puts forth the saints of old as examples.   In addition to the passage above from Hebrews, Paul does something similar in 1 Corinthians.  But instead of positive examples, Paul appeals to negative ones: “Now these things took place as examples for us, that we might not desire evil as they did” (1 Cor 10:6).

But, it is not just to biblical characters that we can look as examples (positively or negatively).  We can also look at the lives of the saints throughout modern history and be inspired, encouraged, and motivated by their faithfulness.

One particular example of such a saint is the Scottish Olympic sprinter, Eric Liddell (1902-1945).  I have recently read several biographies of Eric Liddell as I have prepared to teach on his life at my home church.   Made famous by the 1981 film Chariots of Fire, Eric’s life was an example of what faithful devotion to Christ can accomplish.   Refusing to run on Sunday, he withdrew from the 100 meters in the 1924 Paris Olympics—his very best event and the one for which he had trained.  Instead he ran in the 400 meters, an event in which he was decidedly not favored.   And he won the gold.

His legacy, however, was not being an Olympic champion.  His legacy was that he stood for truth even when his own well-being (and popularity) was bound to suffer.  In short, Eric Liddell valued God’s glory more than his own glory.

I also have a personal interest in Eric Liddell’s life simply because I have walked and lived in many of the same places he did.   He studied at the University of Edinburgh (as did I) and lived there for many years of his life.  In the 1981 film there is even a brief shot of Eric Liddell running up the steps at New College, where the Edinburgh divinity faculty resides. This is the view here:

Over the next several months, I plan to offer a number of blog posts on lessons learned from the life of Eric Liddell.  Why?  Because he is a modern example of the man in Psalm 1: “Blessed is the man who walks not in the counsel of the wicked . . . but his delight is in the Law of the Lord and on his law he meditates day and night” (Psalm 1:1-2).

UPDATE: Prior Installments in this Series

#1: “Christian Character Really Does Matter”
#2: “Determination is not Contrary to the Gospel of Grace”
#3: “God Can Use Anyone to Advance His Kingdom”
#4: “Truth is More Important than Popularity”