Since the Christian worldview is largely on the defensive these days, it is easy to forget that non-Christians also have a worldview.  They are not neutral or undecided about the nature of reality, but have a network of beliefs that is designed to explained the way the world works, or more importantly, the way they think it ought to work.

Some non-Christians may not even realize they have a worldview, and even those who know they have one rarely put all their intellectual cards on the table.  You have to sniff around a bit to determine what some people really believe.

But then, in other situations, people just put their worldview out there for all to see.  The other day I pulled up behind a car that contained a litany of bumper stickers expressing their view about all sorts of things.  They were not hiding their worldview (or at least parts of it).

But, as might be expected, this individual apparently took very little time to consider whether the content of these stickers made sense or even agreed with one another. So, I decided it would be interesting to evaluate this person’s “bumper sticker worldview.”  Below is a photo of the bumper (forgive the fuzziness, it was not an easy shot!) and I will analyze each sticker one at a time. 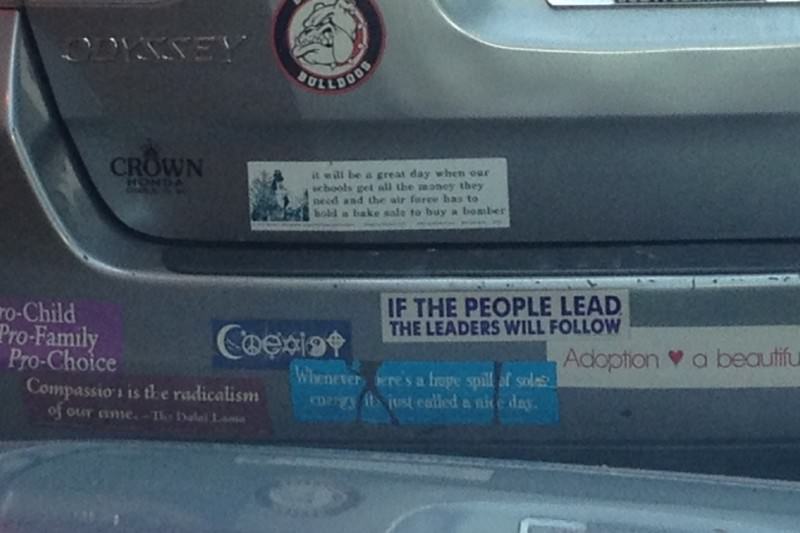 1.”Pro-Child, Pro-Family, Pro-Choice.”  This is a popular bumper sticker out there for the pro-choice crowd. In order to allay fears that they may be anti-child (gee, what might give people that impression?) they insist you can be for abortion and for children.  Needless to say, the recent Planned Parenthood videos have exposed the tragedy of this logic.  You can’t say your pro-child when you kill babies in the womb and sell their parts.  The abortion movement is not pro-child, but pro-self. It puts the pleasures and conveniences of the individual above all else.

2. “Compassion is the radicalism of our time–the Dalai Lama.”  If compassion is highly valued by this individual, then they ought to extend some to babies in the womb.  How can you call for compassion, and then, on the same bumper, turn around and advocate for abortion?  Utterly incoherent.  Moreover, this tacit endorsement of Buddhism (Dalai Lama) raises issues.  Buddhism, as a monistic and pantheistic worldview, has no basis to account for good and evil in the world.  If so, then why care about compassion in the first place?  On a monistic/pantheistic worldview, why does it matter what one person does to another?

3. “Coexist.”  This bumper sticker is everywhere these days. If this bumper sticker simply means that all religions should find a way to get along without trying to destroy the other, then one might have little objection to it.  But often this sticker is used to suggest that all these religions are essentially the same, or that no one religion could be true.  But, that is nonsense since all these religions make truth claims that are mutually exclusive (see critique of this sticker by my friend Jake Hunt).  One might also ask if the call for tolerance that this sticker implies would extend to those people in America who are pro-life or believe in traditional marriage. One wonders…

4. “Whenever there’s a huge solar energy spill it is just called a nice day.”  Obviously, this is a pro-environmentalist sticker designed to make us feel guilty about using oil for energy.  Ironically it is stuck to a car that is running off gasoline and thus using the very oil that the bumper sticker mocks.  Again, a major internal contradiction.  It would make more sense of this sticker was attached to a bicycle.  In addition, one should note that the van driver seems more concerned about the environment than the lives of human beings in the womb.  This is the same reason our culture for the last few weeks is enraged about Cecil the Lion but relatively silent about the release of the Planned Parenthood videos.

5. “If the people lead the leaders will follow.”  This is a modified version of a quote that was attributed to Gandhi. On one level its true.  Leaders tend to respond to the wishes of their constituency. Then again, today we are in desperate need of leaders who are willing to do what is right, regardless of whether it is popular.

6. “Adoption a beautiful choice.”  We certainly agree that adoption is a wonderful thing.  But, notice the word “choice” tacked on the end.  For this individual, it doesn’t matter if a person choose abortion or chooses adoption.  Both are equally viable. That is tantamount to saying that it doesn’t matter if one takes a life or saves a life, it’s the same thing.  Again, an incoherent worldview.

7.  “It will be a great day when our schools get all the money they need and the air force has to hold a bake sale to buy a bomber.”  I am not going to enter the fray over public school funding.  But, I wonder if Reagan could have ended the cold war with the philosophy of this bumper sticker.  Moreover, it should be acknowledged that it is only because America has bought many, many bombers of the years (from World War II to the Cold War and beyond) that this individual has the freedom to speak about such things on the bumper of their car.

For a deeper look at worldviews, check out the latest book from RTS Charlotte professor James Anderson, What’s Your Worldview? (Crossway, 2014).

I knew this day was coming.

Duck Dynasty has achieved something no one would have thought possible a couple of years ago.  It is a show about a down-t0-earth country family that eats together, prays together, and hunts together.  They are a no-frills group whose wholesome outlook on life seems like a trip back to a long-forgotten time when parents actually taught their kids that “right” and “wrong” are not just personal preferences, and sex ought to happen in marriage.

Duck Dynasty is the anti-“Keeping up with the Kardashians.”  And millions and millions of people are loving it.

Yesterday it did.   Phil Robertson, the head of the Duck Dynasty family, in an interview with GQ declared homosexuality to be a sin.  Gay-rights groups complained and called for him to be fired.  And A&E effectually fired him (what they call an “indefinite hiatus”).

Now, it should be noted that Robertson offered some graphic descriptions of body parts that were not necessary nor helpful.  It definitely didn’t serve his cause (nor the cause of Christ) to speak in such a crass manner.  However, the objection from various homosexual organizations was focused not on such language, but on his belief that homosexuality was sinful.

Of course, expressing religious views ought not to get a person fired. It didn’t have to happen like this.  In prior generations, when someone expressed their religious views, those who disagreed would still acknowledge that a person had a right to hold those views without being prosecuted and persecuted by the state or by anyone else.  It is a little thing called the freedom of religion.

My how things have changed.

Now, if you happen to express your own religious views, and happen to disagree with the radical homosexual agenda of our modern world, then you are threatened, intimidated, attacked and your livelihood is destroyed.

And ironically, all this bullying is done in the name of “tolerance.”  For a group that seems to use this word in every other sentence, it is remarkable that the homosexual community cannot see how intolerant they are being of anyone who might disagree.

I might suggest an alternative response from the homosexual community that would embody the tolerance they say they value:

We here at GLAAD were disappointed to hear that Phil Robertson thinks homosexuality is a sin.  We disagree.  However, we acknowledge that he has the right to hold and proclaim these views, just as we have the right to hold and proclaim our views.  If we want Americans to be more tolerant of homosexuality, we could hardly accomplish that goal by being intolerant of others who disagree with us.  So, we want to say that we respect and tolerate Mr. Robertson’s views, even though we disagree with them.  We hope this attitude of mutual respect can allow for more dialogue and conversation about these important issues.

Unfortunately, I fear we will never hear a response like this ever again from the homosexual community.  Why? Because they don’t just want the freedom to be homosexual.  They want approval of homosexuality.   And they will never feel that approval as long as people are allowed to disagree with them.

So get ready.   As the federal government embraces the gay agenda, and the intolerant attitude that goes along with it, then we will no longer be living in the America we know.  The only way the government will be able to squash all dissent is to change from a country that loves freedom and to become a country that is totalitarian.

But there are always patriots in such circumstances.  Phil Robertson is one of them.