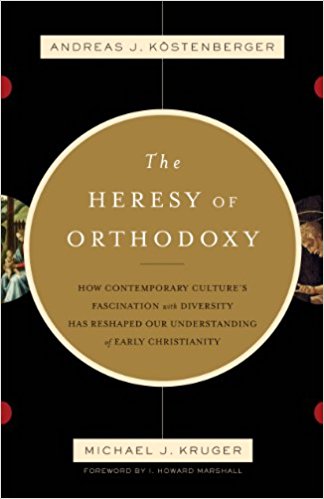 This sort of narrative about the origins of the canon has been repeated countless times over the years, in both popular and academic literature.  But it runs into a significant problem:  END_OF_DOCUMENT_TOKEN_TO_BE_REPLACED

Evangelical Christians have been making the same point for so long, we are running out of ways to say it.

And on and on we could go.

The basic point is this. In the modern liberal push for diversity there is one enormous category missing: intellectual/religious/ideological diversity.

All the while our liberal culture pats itself on the back for being so diverse–whether that diversity be racial, ethnic, or cultural–it continues to ignore the biggest area of potential diversity. Diversity of thinking.

After all, isn’t this what the public education should be doing?  Shouldn’t it be exposing students to a variety of intellectual/ideological viewpoints?  But that is precisely the thing modern universities do not do (or refuse to do).

It is well known that conservative thinkers make up a shockingly small percentage of major university faculties–and many of these faculties are funded by public tax dollars. A recent study, for example, showed less than 2% of English professors are Republicans.

This point has been eloquently made by Nicholas Kristoff in a recent New York Times Op-Ed piece aptly entitled, “A Confession of Liberal Intolerance.”  He writes:

WE progressives believe in diversity, and we want women, blacks, Latinos, gays and Muslims at the table — er, so long as they aren’t conservatives.

Universities are the bedrock of progressive values, but the one kind of diversity that universities disregard is ideological and religious. We’re fine with people who don’t look like us, as long as they think like us.

This lack of diversity is particularly evident in the field of biblical studies at major American universities. Go on a search for genuinely evangelical professors who hold a teaching post in biblical studies at a major public university and see what you find. They are an endangered species.

And the intellectual discrimination doesn’t just happen at the hiring level. It also happens at the Ph.D. level.  Evangelicals have trouble getting hired at major universities because they first have difficulty being accepted into the Ph.D. programs of these major universities.

I have seen this up close and personal here at RTS.  We had an extremely bright student a number of years ago apply to PhD programs in biblical studies at some of the major universities and divinity schools in America.  He had exceptional academic credentials including prestigious undergraduate scholarships, academic awards, fantastic grades, and also a near perfect score on the GRE.

And how many of these major universities and divinity schools accepted him?  Zero.

Of course, critics could always write off this single example as an irrelevant anomaly.  It doesn’t prove anything, they might say. Maybe he was rejected for other reasons.

Even so, the state of our institutions of higher learning today are not in doubt.  They are vastly, enormously, and seriously slanted towards a single ideological and intellectual viewpoint.  That is undeniable.

And if nothing is done about it, our universities (and our culture) will not be the better.  Indeed, we will become what the liberals have always said they want to avoid.  A totalitarian state that simply indoctrinates rather than educates.

When it comes to ethnic diversity, one of the most common refrains in our culture is that 11AM to 12Noon on Sundays is the most segregated hour of the week.   Such statements understandably raise important questions about our churches and ministries and whether they are focused enough on ethnic diversity.

However, African-American pastor Voddie Baucham, who leads Grace Family Baptist Church in Spring, Texas, is concerned about our culture’s incessant push for diversity–what he calls “cherished pluralism.”   In a recent interview with Ministry and Leadership, the magazine of Reformed Theological Seminary, Voddie offered some very helpful insights:

Q: How does the church adapt to the multicultural, multiethnic world we now live in?

So, I’m very cautious about the push for diversity. I desire that all people would hear the gospel and be saved, that God would bring to his church all those whom he would call. The minute I start playing the diversity game, I’m in danger of stepping over certain lost people in favor of other lost people because I need to ramp up my ethnic diversity quota.  And that’s usually problematic.

Q: How is it problematic?

In a number of ways–first, because we change our priorities. Instead of being set on faithfulness, now we’ve added another category. Faithfully preaching the gospel and seeing God bring whoever he brings is no longer enough…It’s not a biblical category of measuring success.

If there’s a problem with our not being welcoming or with being prejudiced toward people, then that’s sin, and we need to deal with that.  But our goal is faithfulness in the gospel.

Q: It has been said that 11Am to noon on Sundays is the most segregated hour in our country. How valid is that statement, and how much of a concern is it?

Is it a valid statement? Probably. Is it reason for alarm? No, because people tend to go to church with people who are like them, and that’s always been the case.  I don’t think we are seeing today what we saw in the 40’s and 50’s, where people were segregated because they were refused entrance. That’s simply not the case.  So is the statement true? Sure, it could be. But is it better in those other hours of the week when people are together because they are forced together?

Inherently, in that statement, we’re saying that the church is wrong and awful because we are not seeing the demographic breakdown that other institutions are seeing during the week…Now we’re thinking we’re inferior to an institution that is forcing diversity on people, and that is simply not the case.  If there’s sinful separation, that’s a problem, but the fact that people tend to congregate with people who are like them in a variety of ways is not necessarily a problem.

You can read the whole thing here.

h J R
@NickCarboniWCNC: As a dedicated student at a Charlotte seminary, #Panthers coach Frank Reich mostly laid low -- except for the one time he wore a Super Bowl jacket to class, and another time he rocketed passes at his fellow students. More on Reich's time at @RTSCharlotte https://t.co/Gz5we6fMaK

h J R
How do we know the Bible is from God? Here's how a pagan philosopher came to believe: https://t.co/rHxB9SWDpG