Last December (2014), I had the privilege of participating in a podcast interview with Darrell Bock and the Dallas Theological Seminary program The Table.  I was joined by my friend Andreas Köstenberger (co-author of The Heresy of Orthodoxy).

The interview covered a wide range of topics related to inspiration and inerrancy, particularly last year’s popular blog series by Peter Enns entitled “Aha Moments.”  That series highlighted evangelical scholars who have discovered things in their biblical research that have caused them to change their views about inerrancy.

In response, I offered a brief series on my own website entitled “Does the Bible Ever Get it Wrong? Facing Scripture’s Difficult Passages.”  I invited a number of prominent evangelical scholars wrote brief posts to deal with some of the issues raised by Enns.  While I was hoping to include a few more installments in that series, time has slipped away and a few folks were not able to get to their contribution as planned.  Regardless, I include the final installments here:

New Series:  Does the Bible Ever Get it Wrong? Facing Scripture’s Difficult Passages

Does the Bible Ever Get it Wrong? Facing Scripture’s Difficult Passages #1 (Greg Beale)

Does the Bible Ever Get it Wrong? Facing Scripture’s Difficult Passages # 2 (Craig Blomberg)

Does the Bible Ever Get it Wrong? Facing Scripture’s Difficult Passages #3 (Darrell Bock)

Does the Bible Ever Get it Wrong? Facing Scripture’s Difficult Passages #4 (Andreas Köstenberger)

Does the Bible Ever Get it Wrong? Facing Scripture’s Difficult Passages#5 (John Currid)

Here is a shot from the video roundtable with Darrell Bock, Andreas Köstenberger and myself.  To watch, go here. 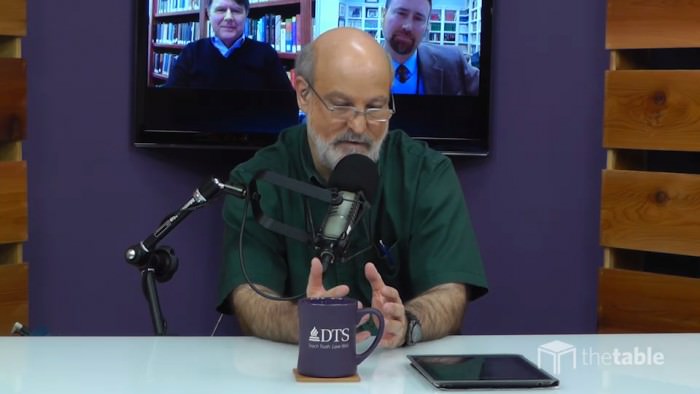 In a prior post (see here), I announced a new blog series designed to address problematic passage in the Bible.  This new series will feature guest posts from other evangelical scholars and is largely a response to the series by Peter Enns’ entitled, “Aha moments: biblical scholars tell their stories.”

One of the more famous and most discussed differences on chronology in the gospels deals with the timing of the Last Supper and the Crucifixion.[1] Here is a difference often trumpeted forth as a clear error between the Synoptics and John.  This is the very issue raised by Daniel Kirk in his contribution to Pete Enn’s “Aha moments” series.  However, things are not so simple.

Here is the problem in a nutshell. In Mark 14:12 we are told the supper took place on the first day of unleavened bread when they sacrificed the Passover lamb (also Luke 22:15 goes in this direction referring to this Passover). Part of what is taking place here is that the Passover (14 Nisan) and unleavened bread (15 Nisan and following for a week) were celebrated one right after the other, so that both names became attached to the feast (Josephus, Jewish War 5.99, speaks of the feast of unleavened bread on 14 Nisan). The very way in which these dates and feasts are handled shows proximate dating could be used. As a popular designation, one could refer to the whole period as either Passover or Unleavened Bread. The problem comes in that John 19:14 and 31 have Jesus crucified on the Passover preparation day which appears to be the day after the meal the Synoptics portray as the Passover meal.[2] This is a complex problem as a detailed study by Howard Marshall shows.[3]

Several proposals exist to deal with the difference without seeing an error. Some posit the use of two calendars or of differences in the reckoning of a day with each gospel writer selecting a different reckoning.[4] This is possible, but there is no clear evidence for a difference in calendar at this point in Second Temple history (though we do have some evidence for it later in certain cases) nor is it clear that the evangelists reckoned days differently, although they could have done so.[5] So this solution can explain the difference, but it is not clearly demonstrable either. Others argue that the Synoptics are correct, and that the day of preparation in John 19 refers not to the Passover day but the sacrifice of the Sabbath of Passover week (which was the next day with a Friday crucifixion).[6] Again this option is possible, but it is not the most natural reading of these texts from John. Others, favoring John’s chronology but accepting the Synoptic sense of the meal, suggest that the meal has a Passover feel to it or was presented like a Passover even though it was not technically a Passover meal offered on the official day.[7] Once again, this could work, but there is no direct evidence for doing this kind of a thing.

So where does this leave us? Two approaches could work. The early sacrifice might explain what is taking place or reading John’s Preparation as referring to the Sabbath preparation in the shadow of the Passover. If the latter is the point, then John is saying that Jesus is crucified in the mix of the Passover season, not on the day of Passover. This can work in the sense that the entire period is associated with the Passover. A modern analogy would be that people celebrate Christmas office parties all the time and it is not Christmas. Such associations are popular in orientation and not technical. So Jesus is crucified in the midst of the Passover season with his death connected to a Passover meal and so he is seen as crucified with a Passover significance. It may be that rather than trying to work out all the details of how this works technically, we are better off to see the season being appealed to in a popular ancient manner and the association made that way. The point should give us pause in not over-literalizing as we read some of these texts. So one or a combination of the solutions noted above could well be answers to the charge of a clear error but being able to show it is more difficult. If less technical approach is taken then we are dealing with a popular reckoning in a generalized ancient chronological approach as a key to understanding what is taking place. Also what we have in not an error but the application of a season that ran many days to events tied to Jesus’ death. All of this is quite plausible given the significance of this season in the Jewish calendar and its shadow on the Jesus event.

[1] The following is an update of a discussion I gave in “Precision and Accuracy: Making Distinctions in Cultural Context That Give Us Pause in Pitting the Gospels Against each other,” in Do Historical Matters Matter to Faith? ed. by James Hoffmeier and Dennis MacGary (Wheaton: Crossway, 2012), pp. 367-81, esp. 379-80. This was but one of several examples I considered in this article.

[2] Verse 14 is explicit in mentioning the Passover preparation day, while v 31 speaks only of the day of preparation.

[5] M Zebaḥ 1:3 seems to suggest a debate about when to sacrifice all of these lambs and allows for an early start. One must recall that we are speaking of sacrificing several thousand lambs on this day. Technically the early offerings were called peace offerings, but they were tied to the Passover as well. Instone-Brewer’s work notes this issue.