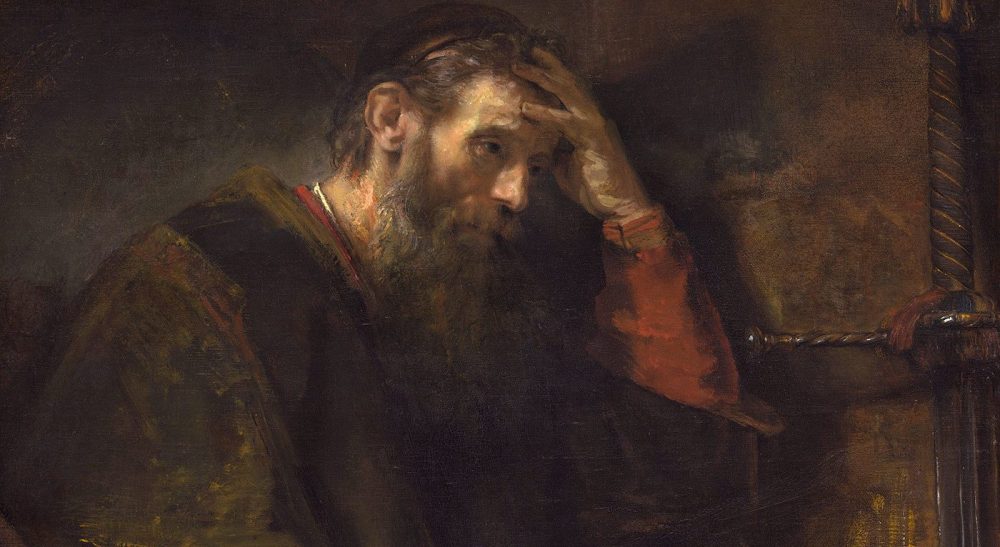 Paul is not really concerned with individual sin, guilt and forgiveness (we are told).  Reformed folks are simply reading that issue into the text due to their cultural situation. Indeed, according to Stendahl, the Reformed view of justification is largely due to Luther’s individual struggle with his own conscience.

In place of the reformed view of justification, NPP advocates have suggested that Paul is really working on a more corporate/community level.  Paul’s struggle is not over how a sinner stands before a holy God, but his struggle is how to unify Jew and Gentile into one community.

Thus justification, it is argued, is really about overcoming ethnocentrism and nationalism.

In a fascinating article published last week in the Wall Street Journal, Barton Swaim (RTS Charlotte grad!) has answered this question in the negative. The NPP has not won the day, argues Swaim, because it is the best explanation of the evidence.  Rather, it has won the day because it fits best with our current cultural context:

My own suspicion is that the New Perspective achieved popularity mainly because young Protestant ministers would rather talk about inclusion and breaking barriers than about the guilt of sin and the pointlessness of trying to erase it by a regimen of good deeds.

And Swaim is not the first to notice this fact. In an oft-overlooked academic article, R. Barry Matlock made the same point over 20 years ago.  His article, “Almost Cultural Studies? Reflections on the ‘New Perspective’ on Paul” (in Biblical Studies/Cultural Studies, ed. J. Cheryl Exum and Stephen D. Moore, Sheffield Academic Press, 1998, 433-459) argues that the NPP is actually a product of its own cultural moment.

In other words, according to Matlock, there is a rich irony in the NPP.  While chiding reformed folks for being culturally bound, the NPP folks themselves seem influenced by their own cultural and theological climate.  Here I highlight several examples offered by Matlock:

1. The NPP focus on community.  If Luther was influenced by an overly introspective culture, Matlock argues that NPP may be influenced by the opposite. He states, “We moderns are not typically concerned so much about sin and guilt and forgiveness as we are about notions of community” (439).  Anecdotally, I see this play out all the time in the seminary world.  Millennials are less concerned about personal piety and much more concerned about community, their place in it, and making sure others are included.  This is why many modern Christians are less concerned about their personal sin and more concerned about corporate sin–and thus want to see more Christian social action, racial reconciliation, etc.

2. The NPP focus on Jewish-Christian relations.  A big part of NPP is seeing Jews and Christians together in the same fold. But, again, Matlock points out that this is quite fitting for our cultural situation: “We need hardly mention how our renewed interest in Jewish-Christian dialogue, standing where we stand in time, exerts its own influence over the new perspective debate” (439). In other words, the NPP fits quite well into a post-holocaust world where there is a desire for harmony between Christians and Jews.

3. The NPP focus on Judaism as a grace-oriented religion.  One of the hallmarks of the NPP is the insistence that first-century Judaism was not legalistic but was grace-oriented.  While that sounds charitable and agreeable on the surface, Matlock points out that reading first-century Judaism this way reveals a commitment to “a certain covert Protestantism” (444).  Put differently, NPP advocates are basically working on the (unacknowledged) assumption that any religion worth its salt has to be grace-driven.  But, he argues, this is a Protestant concern.  Thus, NPP folks are reading Judaism through the lens of their own Protestant understanding of grace. In fact, in another irony, Matlock points out how some Jewish scholars view this aspect of the NPP not as an olive branch but instead as condescending and offensive.  They view it as an attempt to make Judaism more like Christianity!

In sum, Matlock, like Swaim, is arguing that NPP has reinterpreted Paul in such a way that he seems to reflect the concerns of our modern cultural moment.

Put bluntly, Paul, according to some NPP advocates, sounds like a liberal protestant.  He downplays personal sin and guilt, emphasizes social action, and does it all with a dab of grace.

The question he is asking is simply whether Paul primarily has these things in mind when he uses the term “justification” (though these issues can be an important implication/application of justification).

If nothing else, Swaim and Matlock have raised intriguing questions about the “objectivity” in the hermeneutics of the NPP.   If they are right, then apparently the NPP is not as immune to cultural influences as it thinks.