That professor’s name was Bart Ehrman.

Although I could not have known it at the time, I was taking a class with a scholar who would become one of Christianity’s loudest and most prolific critics. Ehrman, now the James A. Gray Distinguished Professor at UNC, would go on to publish more than thirty books about the New Testament and early Christianity—five of which became New York Times best sellers.

Needless to say, such a religion class was a lot for a first-year student to handle. Rattled to the core, I spent that semester wondering whether my Christian beliefs had been a lie. And I was not the only one. I watched as many other Christian students struggled through that class, wondering how to mingle their faith with history (or whether that was even possible).

For myself, I decided to see if there were answers to my questions. Diving deeply into the class material and historical sources, I began to probe into the New Testament’s origins and reliability, and whether earlier Christians had ever addressed the issues Ehrman raised.  I quickly discovered that Christians had addressed these issues—even from the earliest days of the Christian movement—and had done so with depth, precision, and intellectual rigor.

Simply learning that there were answers to Ehrman’s questions was not the end of my intellectual journey. I found myself genuinely fascinated with this new world I had discovered. In a rather ironic turn, my experience in this university religion class set me on a new intellectual trajectory, one that eventually led me to become a New Testament scholar myself, focused on these very same historical issues. 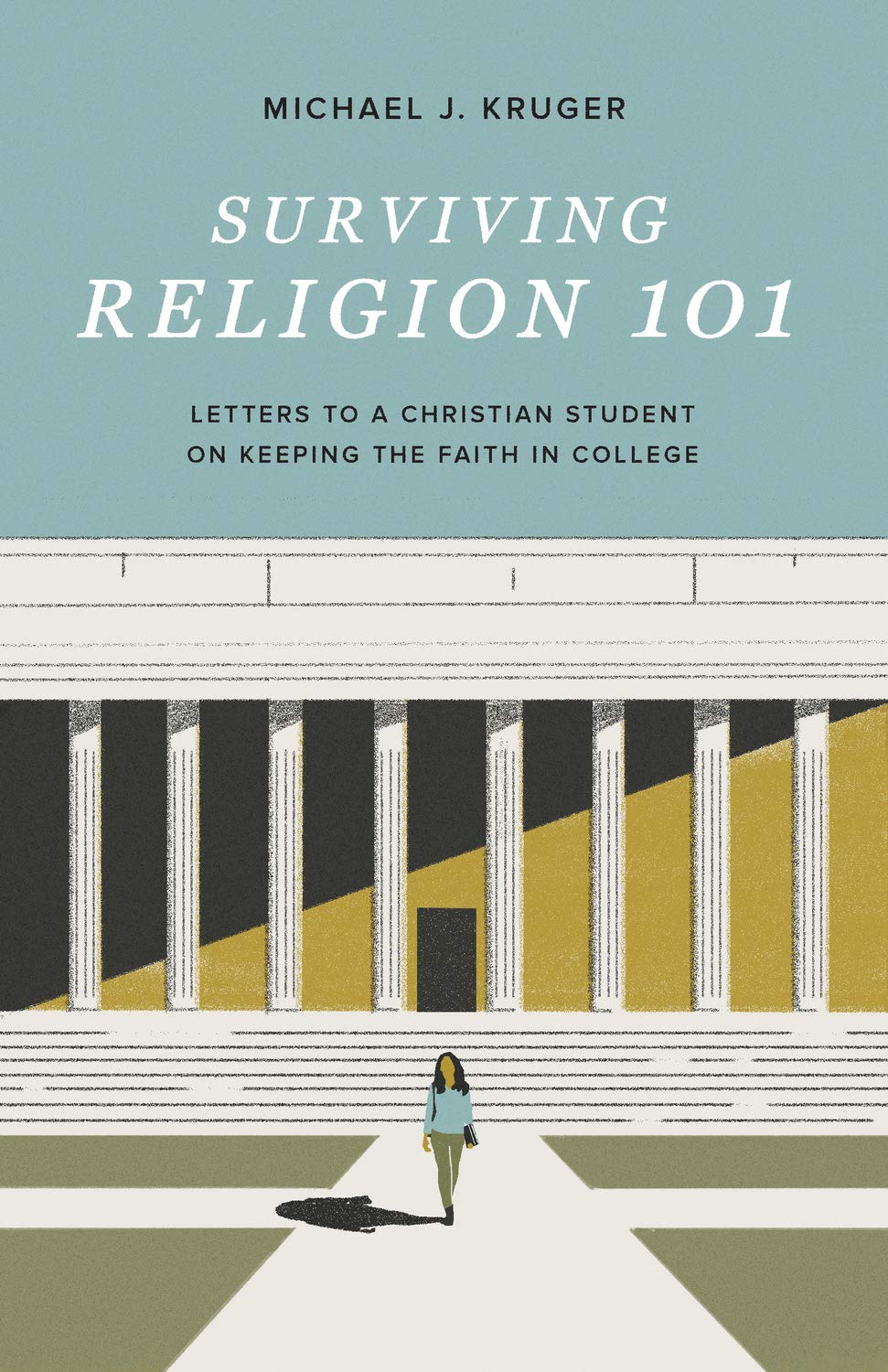 But for many college students, the story ends very differently. Confronted by an intellectual world for which they are not prepared, Christian college students are leaving behind their faith in worrying numbers.

And it is precisely for this reason that I have written my latest book: Surviving Religion 101: Letters to a Christian Student on Keeping the Faith in College (Crossway, 2021).

I have structured the book in the form of “letters” to my daughter Emma, who (in yet another ironic turn) is currently herself a student at UNC Chapel Hill. Each of these “letters” addresses a particular intellectual issue or challenge that I know she (and all college students) will eventually face.

Although the book is for college students (and I’ve written it at an introductory level for that purpose), it is really for anybody with intellectual questions about their faith. My hope is that it can be useful for high school students about to enter college (it might make a good graduation gift!), as well as older adults whose college experience is long in the rear-view mirror.

The book releases April 6th—to pre-order see here.  Also, I have included the endorsements below, along with the first of seven videos highlighting various topics in the book. Over the next couple of months, in anticipation of the book’s formal release, I will post one of these videos each week. To receive these videos by email, you can sign up here.

“This is a great book! I can’t imagine a college student―skeptic, doubter, Christian, struggler―who wouldn’t benefit from it. In fact, I’m sure almost anyone would be helped by this warm and intelligent apologetic for the Christian faith. I will recommend this book often, after first giving it to my own children.”
―Kevin DeYoung, Senior Pastor, Christ Covenant Church, Matthews, North Carolina; Assistant Professor of Systematic Theology, Reformed Theological Seminary, Charlotte

“Every fall, untold thousands of young Christians step onto the college campus and are instantly engaged in the battle of ideas. They need help and encouragement, and Michael Kruger offers a wealth of both in this timely book. The help comes in his serious and faithful confrontation with the big questions that are unavoidable on campus. The encouragement comes from a wise author who is also a father and friend. The chapters are written as letters, and every college student you know needs every letter in this book. Where was this book when I went to college?”
―R. Albert Mohler Jr., President and Centennial Professor of Christian Theology, The Southern Baptist Theological Seminary

“Surviving Religion 101 is a crucial book for all Christians to read because the world that we inhabit has become the university culture of Michael Kruger’s twenties. An epistolary book composed of letters from a loving Christian father to a faithful daughter entering the university, it invites us to ask crucial questions that help us make our calling and election sure. Are we intellectually prepared to understand and respond to the non-Christian thinking that surrounds us? If we believe that personal conversion and personal piety are enough for the Christian college student to survive, we are dangerously wrong. Our lack of intellectual preparation may explain why so many faithful Christians have had their faith shipwrecked by so-called progressive Christianity, living now with cultural change and social activism as proof of holiness. And for this reason, this book is as necessary for students entering Christian colleges as it is for those entering secular ones. Thanks be to God for this book. May it be used by God to preserve the faith of our college students and bring their unbelieving professors into the kingdom of God.”
―Rosaria Butterfield, Former Professor of English, Syracuse University; author, The Gospel Comes with a House Key

“The move from home to college and those influences that grip the mind from the age of eighteen to twenty-two play an absolutely decisive role in shaping the rest of our lives. The need for us to claim the Christian faith as our own at that point―and not as something we have merely absorbed from our parents or school friends―is exhilarating; but the process of so doing is often conflicted and intellectually, morally, and socially difficult. Michael Kruger is a well-known scholar, but he is also a parent with a vested interest in this issue and someone who himself experienced the range of challenges as a young student. In this clearly written book, he draws on all this to engage with the panoply of challenges that people face at college. While he covers the ‘usual suspects’―the intellectual challenges to faith―what is so brilliant and helpful about this book is the way in which he understands and addresses the form of challenges to faith as they manifest themselves in today’s therapeutic culture. Many students struggle with the claims of their faith because the moral tastes of our modern world make it seem so implausible. Kruger understands this and has written a book that speaks precisely to the kinds of problems that afflict college culture today. Students―and their parents―will find this work most helpful and enlightening.”
―Carl R. Trueman, Professor of Biblical and Religious Studies, Grove City College

“Having sent four children off to large state schools for their college years, I am thankful that Michael Kruger has written this book. With compassion and clarity, he addresses key questions that often precipitate a crisis of faith for young believers. This accessible book equips families for good conversations about challenges to our faith, helping us trade panic and doubt for blessed assurance.”
—Jen Wilkin, Bible teacher; author, Women of the Word; None Like Him; and In His Image

“I wish I’d had a guide like Michael Kruger when I was in college. There’s no one I trust more to help students navigate the difficult challenges to our faith that arise in both the classroom and also the dorm room.”
―Collin Hansen, Editorial Director, The Gospel Coalition; Host, Gospelbound podcast

“Today, Christian students in secular universities will face not just intellectual challenges to their faith. Perhaps even more caustic will be the social and moral pressures. Michael Kruger ably addresses the intellectual issues, and as a real, high-powered Bible scholar, he is especially effective in dealing with the objections to God’s word. But he also strengthens students for the more subtle spiritual trials they will encounter, addressing his readers with empathy and grace.”
―Gene Edward Veith Jr., author, Loving God with All Your Mind and Post-Christian