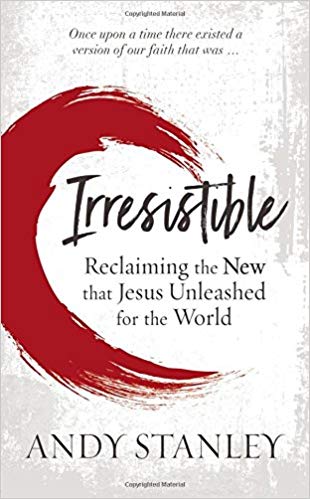 I recently received Andy Stanley’s latest book, Irresistible: Reclaiming the New that Jesus Unleashed for the World (Zondervan, 2018).  My review of the book will soon be available on The Gospel Coalition website.

For now, I thought it would be helpful to highlight the promotional statements on the cover.  By the looks of them, Stanley’s message in this book will be very similar to his controversial sermons over the last couple of years (see my prior interactions with Stanley, here and here).

Here are some of the statements:

Once upon a time there was a version of our faith that was practically . . . irresistible. But that was then. Today we preach, teach, write, and communicate as if nothing has changed. As if “The Bible says it,” still settles it. It’s time to hit pause on much of what we’re doing and consider the faith modeled by our first-century brothers and sisters who had no official Bible, no status, and humanly speaking, little chance of survival.

Here we see again one of Stanley’s consistent messages, namely that a Bible-centered faith is not the solution but the problem. They didn’t have a Bible in the early church (we are told) and they did just fine without it!

Andy will invite you to embrace the version of faith that, against all odds, initiated a chain of events resulting in the most significant and extensive cultural transformation the world has ever seen. A version we must embrace if we are to be salt and light in an increasingly savorless and dark world.

So, it looks like the message of the book will basically be: “To go forward we first have to go back.”   Back to the early church, that is.  And certainly such a desire is commendable. I agree that more attention needs to be given to the early church (see my recent Christianity at the Crossroads).  But, does that mean a good chunk of this book will be about church history? We will see.

Andy Stanley illustrates how a shift from the resurrection of Jesus to a Bible-centric faith has left us with an anemic version of Christianity that undermines our credibility and our evangelistic effectiveness.

There are some enormous claims in this sentence.  One claim is that focusing on the Bible actually hinders evangelism!  Not sure how that can be demonstrated, but we will see.  Another major claim is that early Christians were (apparently) not interested in the Bible but instead just focused on the resurrection. Again, that has to be shown.

So, there’s a lot to cover in this book.  I look forward to reviewing it.