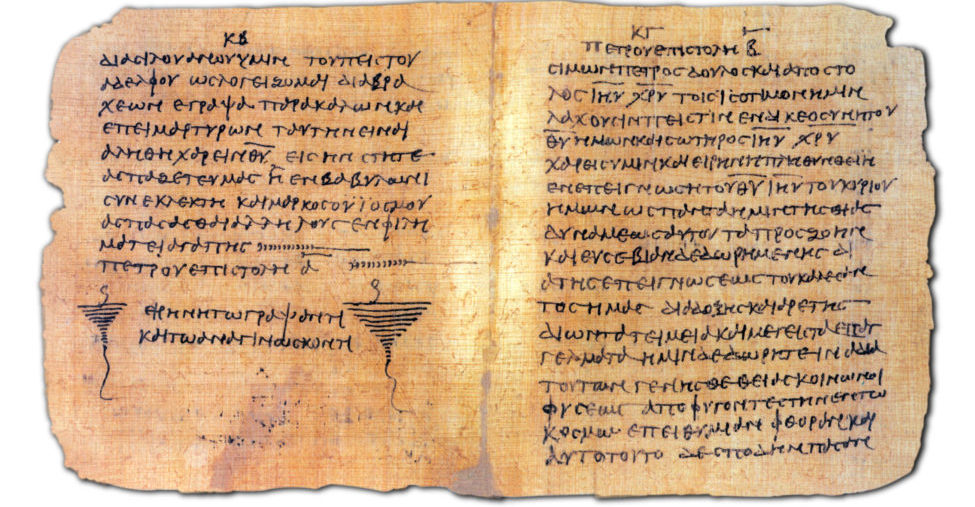 The conversation between myself and John Meade continues.  He offered an initial critique of chapter 7 of Canon Revisited, to which I responded.  And now he has responded to my response. (I know, the back-and-forth is hard to keep up with!).

I appreciate Meade’s interaction with my material. In some ways, our conversation is making progress.  But in other ways, unfortunately, it is not.  Let me offer some reflections on his latest post.

Understanding the Argument from the Codex

In my initial response to Meade, I argued that he has misunderstood the argument I (and others) are making about the codex.  The argument is not that the codex book format can provide exact boundaries of the canon.  Nor is the argument that any book that appears in a codex is automatically canon.

Thus, simply pointing out that non-canonical books appear in a codex format is not a valid counter-argument.  Meade keeps making this counter-argument and that is why I suggested he is taking an “all-or-nothing” approach to the codex.  He acts as if one exception makes the codex irrelevant for canon.

In his latest post, Meade defends himself against this “all-or-nothing” approach, but I confess I do not understand his defense.  Rather than addressing my actual argument, Meade inexplicably returns to the issue of method, namely that patristic evidence should take priority over material evidence.  He states:

“The clearer evidence should interpret the less clear. My critique is that he should have continued his discussion of the testimonia, which he resumes in ch. 8 over a discussion of the books at the ‘borders.’”

But how does this answer my argument?  It is still the case that there mere existence of non-canonical books in a codex format does not undercut the importance of the codex for the origins of the canon. The reason this matters is because Meade continues to use the “all-or-nothing” argument later in his post (which we will discuss below).

Rather than acknowledging this fact, Meade doubles down on the complaint and now insists that I should have dealt with manuscripts only after chapter 8!  So, is the critique now that I should have ordered my chapters differently?  One gets the impression that Meade might be searching for things to disagree with.

As I observed above, Meade cannot let go of the all-or-nothing argument.  Even though I have repeatedly clarified my view, Meade is not satisfied:

“And yet, it is difficult to believe [Kruger’s] conclusion [that codex does not automatically tell us which books are canon]. Remember, he cited J. K. Elliott approvingly on p. 250, “Canon and codex go hand in hand in the sense that the adoption of a fixed canon could be more easily controlled and promulgated when the codex was the means of gathering together originally separate compositions,” which appears to me that Kruger is also claiming that canon equals codex.”

I have to admit this is genuinely stunning.  It’s almost as if Meade is plugging his ears to everything I have said, insisting that he knows what I really believe about the codex.  As a result, he simply declares, “Kruger is…claiming that canon equals codex.”

Not only am I not arguing “canon equals codex” but Elliott (whom Meade is referring to) is not arguing that “canon equals codex.”  What is happening here is that Meade has profoundly misunderstood the argument from the codex.  When I (and others  like Elliott) argue that “canon and codex go hand in hand” that does not (!) mean that every book in a codex format was automatically considered canonical. Nor does it mean we can determine the exact boundaries of the canon simply by looking at which books appeared in codex format.

But, the phrase “canon and codex go hand in hand” can refer to the following:

But, neither of these options is what Meade has suggested, namely that “canon equals codex.”

P72 and the Shepherd

Meade makes his critique more specific by bringing up a few examples from early Christianity of non-canonical books in codex format.  He begins by mentioned P72, a “composite” codex containing an unusual mix of works, including 1&2 Peter, Jude, the Nativity of Mary, 3 Corinthians and others.

Meade seems to think the existence of P72 somehow undercuts my argument (showing again that he continues to employ the all-or-nothing approach).  He states:

Or when one comes to composite or miscellaneous codices such as P72…one need not conclude that this MS is an exception that proves the rule because it contained NT works beside non-canonical ones. Kruger’s view of the significance of the codex leads him to explain away the “exceptions” to the rule of what is typically Christian. Yet, these MSS are obviously Christian, no matter their appearance or putative functions.

Meade says I am merely trying to “explain away” P72 as exception to the rule.  What he seems to miss here is that P72 is, in fact, an exception to the rule!  What I mean is that P72 is a genuine anomaly in the overall manuscript tradition of the NT (and, I am sure, Meade knows this).  There are very few manuscripts like it (even the end of Sinaiticus doesn’t compare).  The mixing of apocryphal and canonical works like this is genuinely rare.

This is precisely the problem (again) with Meade’s reasoning.  As I said before, he misses the forest for the trees.  By harping on the exceptions to the trend, he misses the fact that there still is a trend.

Moreover, Meade makes the statement that P72 is “obviously Christian.”  But, do I deny that somewhere?  I think it is certainly possible that those who assembled P72 may have regarded all these books as Scripture.  But, even if that were the case, that does not affect the overall argument I am making.

As for the Shepherd, Meade complains that I should have followed Elliott’s lead and been willing to acknowledge the compiler(s) of Sinaiticus thought the Shepherd was Scripture:

“My critique here of Kruger’s method is that he should not have cited Elliott on the codex so approvingly on p. 250 and then seek to explain the evidence of the Shepherd in Sinaiticus by appealing to Horbury on the Muratorian.”

First of all, let me say that I think Elliott may well be right–the compilers of Sinaiticus may have regarded the Shepherd as Scripture.  I said that already in a prior post.  My point was simply that this is not the only way of understanding the presence of the Shepherd.  There are other options to consider.

But, Meade’s language gives the impression that I was somehow tricking the reader by citing Elliott “so approvingly” in one place, and then not following Elliott in another.  But, is there a rule somewhere that if I agree with a scholar in one place, I have to agree with him also in other places?  I am not aware of such a rule.  It seems perfectly legitimate to acknowledge a general point by Elliott (about the codex), even if I differ on the specific application of that point (in the case of Sinaiticus).

In the end, let me say that I appreciate this conversation with John Meade.  If his point is simply that we have to be recognize the limitations of the material evidence, then (of course) I heartily agree.  The material evidence is not absolute. And it cannot tell us everything.

But, I think it can still tell us a lot.  It can illumine the earliest stage of the NT canon and help us understand how and when it developed.  And for that reason, I think the material evidence still has much to teach us.