Note: This post is regularly updated with new handouts and MP3 recordings.

Have you ever had a time in your life when you really (I mean really) doubted the truth of the Bible? Maybe you wondered whether everything you ever believed was a lie. Anyone who’s gone through such an experience, and come out on the other side, knows how much their spiritual health is tied to their trust in Scripture.

In short, understanding the origins and authority of the Bible is a practical issue. It’s a spiritual issue. While I am convinced that most evangelicals believe the truth of the Bible, I think far fewer can articulate why they believe it, or know how to defend it against attacks.

For these reasons, I am excited to launch a new Sunday School class at my home church, Christ Covenant Church (PCA): “How Did We Get Our Bible? The Origins and Authority of Scripture.”  This is a lay-level introduction to the key doctrines of Scripture, as well as defense against the many and varied attacks on the Bible in our world today.

The class is part of a larger new initiative at Christ Covenant where we are transitioning to a topic-based Sunday School program rather than the standard age-and-stage model. We were thrilled to see the enthusiasm last week as we had record Sunday School attendance across our seven classes (many with standing room only!).

For those in my class who want to do further reading on the origins and authority of the Bible, you will want to check out my Top Ten List for Books on the Authority of Scripture. These are, in my opinion, some of the best works on the subject over the last few generations.

Below is a class description along with the schedule for the 13-weeks we will meet. Each week I will update the schedule below with the handout and MP3 recording (sorry, no recording for week one but we will record the others!). END_OF_DOCUMENT_TOKEN_TO_BE_REPLACED 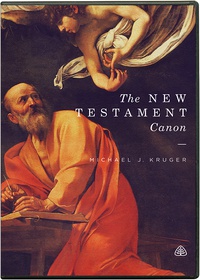 One of the most common questions I am asked is whether I have introductory, lay-level material on the origins of the NT canon that people can use in their churches.  For small group Bible studies or Sunday School classes, most people simply won’t read Canon Revisited or any of my other books.

So, I point the reader to my recent video series with Ligonier where I give six introductory lectures on the origins and authority of the NT canon.  My hope is that this will meet a need for churches looking to do something on canon but not knowing where to turn.

You can order the videos here in either MP3 or DVD format (currently the DVD’s are sold out!). Here are the six topics along with description of the series: END_OF_DOCUMENT_TOKEN_TO_BE_REPLACED

Turns out the Bible is not true after all.

So, argues Thomas, once we get that pesky Bible out of the picture, we are free to approve homosexuality as right and good. And once we do that, then our churches—which have been bleeding members for years—will finally grow again.

Of course, Thomas is not the first one to try to make Christianity compatible with homosexuality. But, most others try to do it by arguing that we’ve merely misunderstood the Bible. Once we interpret it rightly, it turns out the Bible is actually for homosexuality.

But not Thomas. His argument is more simple: the Bible just got it wrong.

He states: “We have learned some things that the ancients — including Moses and Paul — simply did not know. Not even Jesus.”

But now, in the last generation, Thomas finally got it right.

Needless to say, that is a bold argument. And it will take a lot to back it up.  So, how does Thomas get there?  Basically he has three arguments against the Bible: END_OF_DOCUMENT_TOKEN_TO_BE_REPLACED

Last night, RTS Charlotte put on its bi-annual vision banquet at the Carmel Country Club here in Charlotte.  It was a beautiful venue overlooking a fantastic golf course.

Our musical guest was Sandra McCracken, one of the most gifted Christian artists today.  Blending an amazing voice with acoustic guitar and piano, Sandra played a number of her well-known songs, including We Will Feast in the House of Zion. She was such a delight to listen to.

The opening prayer for the evening was offered by Will Huss, newly appointed national Coordinator for Reformed University Fellowship (RUF).  RTS Charlotte has had a long and fruitful relationship with RUF, sending out many campus ministers over the years.  So, it was great to have Will join us.

Kevin DeYoung, Assistant Professor of Systematic Theology here in Charlotte and Senior Pastor of Christ Covenant Church, gave an overview of why seminaries matter and why he loves teaching at RTS Charlotte in particular.

Then I spoke briefly on Matt 9:37: “The harvest is plentiful, but the laborers are few.”  It’s a perfect verse to capture the mission of RTS, which is to send out as many laborers as possible—pastors, counselors, missionaries, campus pastors—into a needy world that lacks good shepherds.

Here are a number of photos that capture the feel of the evening.  Enjoy! END_OF_DOCUMENT_TOKEN_TO_BE_REPLACED

As many of you know, from 2014 to 2016 I led a women’s Bible study on the RTS Charlotte campus on the book of Romans–42 installments in all. The HD videos of the study (with handouts) are available here.

We continue to be encouraged to hear that the videos are being watched by folks all over the country and the world.  Just a short time ago, I received an email from a group in Slovakia that is working their way through the Romans study.

The idea for this study was born out of a desire to connect with the people in the city of Charlotte outside the formal classroom setting. A lot of people are too intimidated to take one of the standard seminary classes, but I thought they may be willing to come on campus an participate in “normal” Bible Study.

After taking a year off from Romans, this past week we launched the women’s Bible study again.  We are so excited to have 165 women register.

This time we are in the book of Hebrews which is a magnificent book in its own right. As is well known, the theme of the book is the supremacy of Christ over all things.  The audience is likely a Jewish-Christian community thinking about turning back to the old ways of Judaism.

So the author spends his time showing that Jesus is superior to the prophets, the angels, to Moses, to Joshua, to Aaron and more.

Although modern American audiences may not be thinking about a return to animal sacrifices in the Temple, the book certainly applies to anything we substitute for Christ in our lives.  In short, it reminds us that “Jesus is Better.”

For details on the Bible study, see here.  For the introductory video, along with the video of the first session, see below: END_OF_DOCUMENT_TOKEN_TO_BE_REPLACED

@RTSCharlotte: There is still time to register for next weeks' Equip Seminar "Knowing the Person" with Ed Welch. This should be a great event and we invite you to be part of it. Details and registration link below. https://t.co/ADnXTq0dhv https://t.co/edO34J4ISv

h J R
Pleased to see my new book, "Bully Pulpit" has won the @TGC Book of the Year Award for the ministry category! https://t.co/YXly9cmOoP

h J R
@ReformTheoSem: NEWS: The Center for Church Planting at @RTSCharlotte will host the Forge Conference on January 16, 2023. The conference theme will be "Engaging the Shift" and will feature speakers Dr. @Irwyn Ince and the Rev. Charles McKnight. https://t.co/38enYbUEs7

h J R
There's been a lot of discussion about "deconversion" these last few years. An overlooked fictional example is Saruman from Lord of the Rings. Here are five lessons we can learn: https://t.co/YHoEYWQag0