This fourth installment video deals with one of the most common criticisms we face: “Aren’t Christians just arrogant know-it-alls?”

I can still remember watching an interview years ago where Oprah Winfrey asked Tom Cruise about his controversial religion of Scientology. Cruise’s faith had come under fire due to recent events, and Oprah was pressing him pretty hard about what he really believed.

After a few testy exchanges, Oprah finally got to the nub of the matter: “So Scientologists don’t believe their way is the only way?”

With this one solitary question—which was obviously the question—the tone of the interview shifted dramatically. Whatever other things Cruise might believe, surely he couldn’t believe his religion was the only right one. Who could ever have the audacity to believe that?

Not surprisingly, Cruise alleviated Oprah’s fears: “No. We’re here to help. It’s not like you’ve got to believe this, . . . [that] you must believe what I believe.”

After a deep exhale, the interview then continued on with a more gentle, friendly tone.

That entire exchange highlights the core anxiety for Christians. How do we handle people who think we are exceedingly arrogant when we claim that Jesus is the only way to heaven? Here’s my answer in the video below: END_OF_DOCUMENT_TOKEN_TO_BE_REPLACED

This week’s video deals with one of those things we all wonder as Christians: “Why does it seem like the smartest people are the ones who reject Christianity?”

This question will be particularly acute for college students because their professors are often the ones who don’t believe. There they are, trained in some of the finest research universities in the world. Brilliant. Smart. Filled with knowledge.

And there you are. A nineteen-year-old first-year student with no advanced degrees, no letters after your name, no credentials. They’re using words you’ve never even heard of before. What are the chances that you’re right and these professors—nearly all of them—are wrong? The chances of that seem pretty low.

Left unchecked, that question will begin to gnaw away at you, like a sliver in your mind, creating doubts about what you believe. So it’s important to have an answer. It’s critical to understand why the intellectual landscape is what it is.

So, in the video below, I give you some things to remember: END_OF_DOCUMENT_TOKEN_TO_BE_REPLACED

Last week I began a new blog series in anticipation of my forthcoming book, Surviving Religion 101: Letters to a Christian Student on Keeping the Faith in College (Crossway, 2021). This new series will include 7 videos that tackle key intellectual questions about the Christian faith.

This week’s video deals with one of those things we all fear as Christians: “What if get asked a question that I can’t answer?”

And when it happens, you get that sick feeling in your stomach. You may feel silly or embarrassed. Or you might doubt what you believe, wondering whether there is an answer to the question you’ve been asked.

Well, we’ve all been there. In this video below, I lay out some thoughts about how to respond. Enjoy! END_OF_DOCUMENT_TOKEN_TO_BE_REPLACED

That professor’s name was END_OF_DOCUMENT_TOKEN_TO_BE_REPLACED

Ever had a moment in your life where you doubted what you believe? I mean, really doubted?

I can still remember when that happened in my life. It was my freshman year at UNC-Chapel Hill as I was sitting in a religion class on the New Testament. The professor was bright, funny, and persuasive. And he was arguing that the New Testament was chocked full of mistakes and contradictions.

As I sat there, I had no answers. I began to wonder whether Christianity was just something people made up.

By God’s grace, I persevered through those doubts and now have the privilege to be a professor who argues that the Bible can be trusted. But there are many other college students each year who have the same experience as mine. They hear challenges to what they believe and they wonder if there are answers. 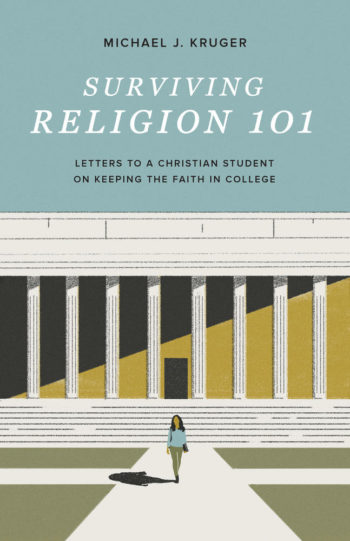 For this reason, RTS Charlotte is launching a new a weekly video series where I address some of the most potent attacks on the Christian faith. It is based on my forthcoming book, Surviving Religion 101: Letters to a Christian Student on Keeping the Faith in College (Crossway; releases April 6, 2021).

While this video series is certainly applicable to college students, it is really for any Christian who wants to be equipped to answer the most difficult questions about the Christian faith.

In the video below, I introduce the series and explain more about my own story. To learn more about how to receive the six-part video series, see here! END_OF_DOCUMENT_TOKEN_TO_BE_REPLACED