As a seminary professor (and a pastor) I spend a lot of time helping students grow and develop as preachers. After hearing a student preach, I will often get coffee or lunch with that student and we will discuss the strengths and weaknesses of the sermon and how it can be improved.

Over the years, I have learned to ask students a key question that can reveal a lot about how they are developing as a preacher.

“What did you leave out?”

Most of the time that I ask that question I am met with a blank stare. Students expect to be asked about the content of the sermon—i.e., what was left in. But, they are not prepared to answer the question about what is left out. And there is a reason for that. Often, very little is left out.

One of the key mistakes of young preachers (and even some older preachers!) is to take all that they have learned during their sermon prep and to put it in their sermon. Every exegetical observation, every textual nuance, every connection with OT (or the NT), every analogy or illustration, makes it into the final version.

Of course, this is why sermons from seminary students are known for being extremely detailed, overly technical, and, often quite lengthy.

Why do seminary students tend to do this? END_OF_DOCUMENT_TOKEN_TO_BE_REPLACED

If you are considering seminary, you will not want to miss the RTS Charlotte preview day on Sept 29th. Here are a five things you’ll get to do if you come join us: 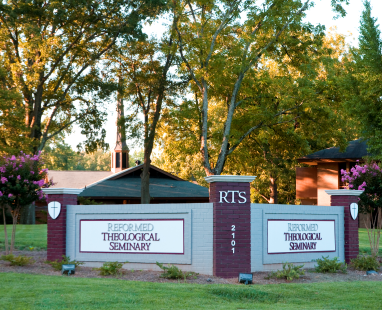 1. Take a tour of our beautiful 20-acre campus. We are blessed with a wonderful property nestled in the heart of south Charlotte.  You will not only see our many buildings, but also our wide open lawns for picnics, sports, or just catching up on your reading outdoors. And North Carolina is especially beautiful in the fall!

2. Sit in on a class with our top-notch faculty. The Charlotte campus has 12 residential faculty members, and the morning of Sept 29th you can catch Systematic Theology with Dr. Kevin DeYoung, Pastoral and Social Ethics with Dr. James Anderson, or Methods of Biblical Change with Dr. Nate Brooks. END_OF_DOCUMENT_TOKEN_TO_BE_REPLACED

Since I am a professor at a seminary, it is not unusual (indeed, it is very common) for students to come to me for advice about whether they should enter the pastorate or seek to be a professor.  While many of these students may have entered seminary with the intention of entering pastoral ministry, they have found themselves falling in love with a deep study of theology and the Bible.  And so, they think, perhaps the academic world is right for them.

I confess that I am often torn when students come to me with this question.  On the one hand, I want to discourage students from pursuing the Ph.D./professor route.  In addition to the fact that Ph.D. work is far more rigorous (and costly) than they think, there is a great need for solid, bible-centered preachers/pastors today. The more solid folks in the pulpit the better.

On the other hand, we also need good seminary professors.  Indeed, it is these professors that shape the theology, philosophy, and ethos of the next generation of pastors.  Strong seminaries lead to strong churches. Thus, I am always on the look out for the next potential faculty member who can shape these future Christian leaders.

Of course, in the midst of such discussions, it is important to remember that the these two choices—professor or pastor—are not polar opposites.  On the contrary, there is tremendous overlap between them (when conceived rightly).  So, I thought it might be helpful to sketch out a spectrum of options between the world of pastors and professors.  And not surprisingly, I will do this by using a chiastic-style structure (!): END_OF_DOCUMENT_TOKEN_TO_BE_REPLACED

Before it was all said and done, books were strewn all over my desk, across my computer table, on the floor (on both sides of my desk), and up against the wall. Here’s the picture below! 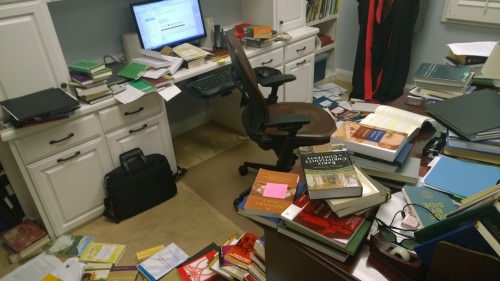 But, as I looked at the picture, I found a sense of joy in the chaos of my office.  It reminded me of END_OF_DOCUMENT_TOKEN_TO_BE_REPLACED

It’s that time of year again.

A wonderful new crop of seminary students has arrived here at RTS-Charlotte and has already begun the grueling month-long experience of Summer Greek. And, like all seminary students before them, they will begin to ask the question of why studying these ancient languages even matters. After all, a few years after graduation all will be forgotten. In the midst of a busy pastoral life, who could possibly maintain proficiency in the languages?

As a result of these questions, some students decide (very early on) that the biblical languages are just something to be endured. They are like a hazing ritual at a college fraternity. No one likes it, but you have to go through it to be in the club. And then it will be over.

Behind this “take your medicine” approach to the biblical languages are a couple of assumptions that need to be challenged. First, the characterization of pastoral ministry as somehow incompatible with the languages (due to busyness, or other causes), is an unfortunate misunderstanding of what a pastorate is all about.

No doubt, pastors should be busy shepherding their flock, meeting with ministry leaders, and running the church. But, the core of the calling is to be a “minister of the word.”

And if the pastoral call is to be a minister of the Word, then there is a significant component of pastoral life that should be devoted to serious study of the biblical text—beyond just the preparation for that week’s sermon.

Put differently, pastors should continue to be students. They need to be readers, thinkers, and theologians.

Unfortunately many modern pastors do not view themselves this way. This is evidenced by the language used to describe the place a pastor works at the church. In prior generations, it used to be called the pastor’s “study” (because that is what he did in there!). Now, it is called the pastor’s “office” (because pastors view themselves more as a CEO). 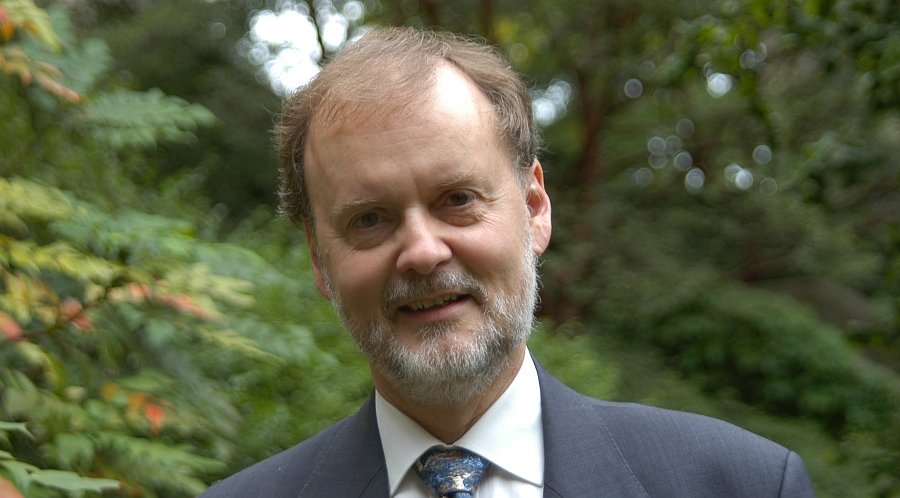 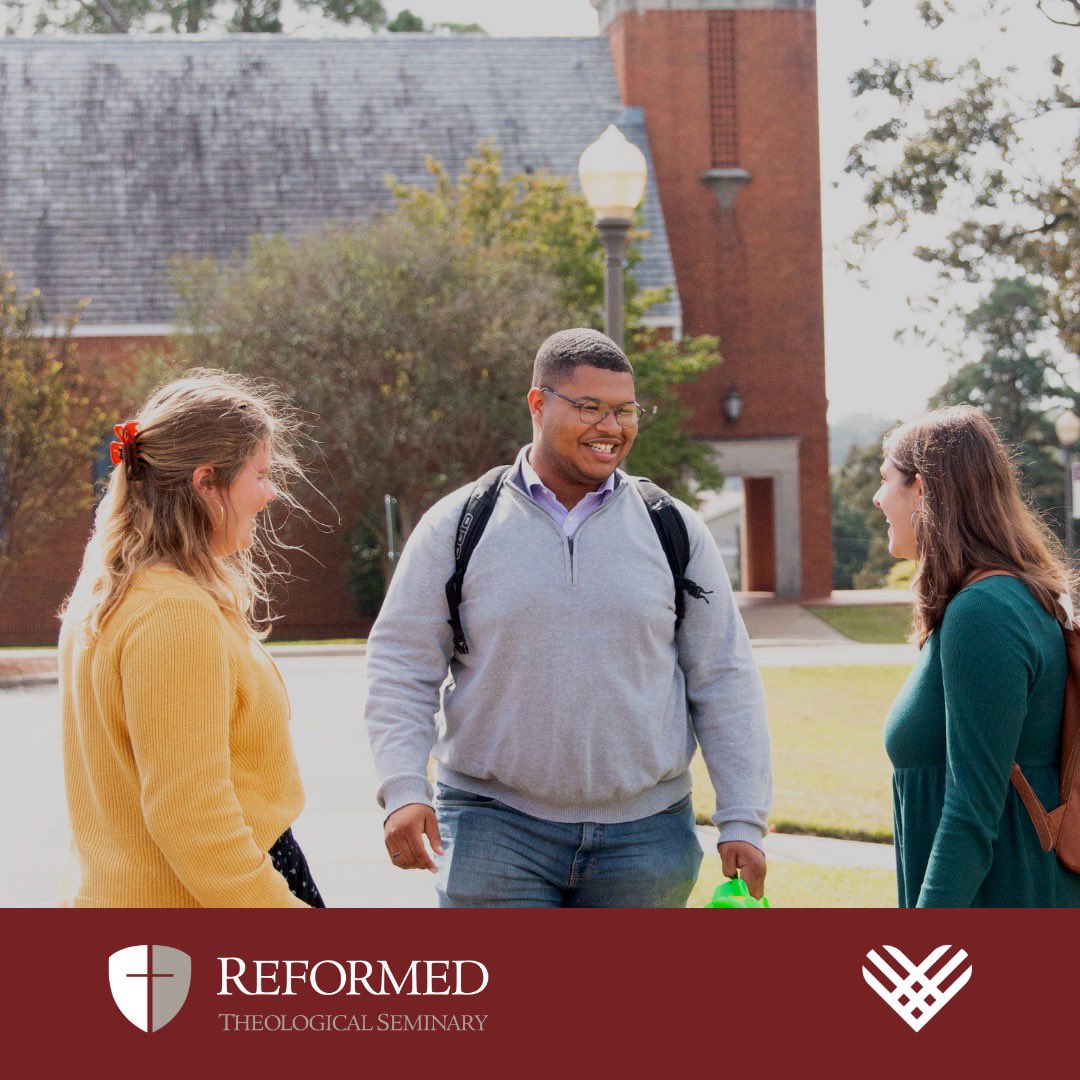